Once again, I chimed the bell. It was hard to make out if there was movement or not beyond the beveled glass of the front door but there was certainly a rustling to speak of.  Finally a loud (Clang!) then a shadowy figure of some sort swinging from up above. Squinting just right proved it to be a jacket hanging from the chandelier in the foyer. Squinting to the left exposed Max, leaning out over the railing, trying with all his might to snag it.

“No! “  I cried through the door. “You can’t reach it!”  Terror ran rampant for just a moment until my mind recalled that Max is not a fool.  He listens, immediately concedes to reality and allows his older brother (home from college) to “Ahab” it down with a broom but not without some scolding.

“What were you thinking Max?”

Max’s gaze turned to the marble floor. “I don’t know. I was just trying to throw my jacket down.”

Farm Burger was neigh and there was no time for Max to feel dogged and downed before we hit the road. A quick change of the subject “I REALLY, REALLY have to use the bathroom” and things were back on track.

Obviously my ego would love to believe that he was so excited for our next burger adventure that he just straight up spazzed out, rashly chucking his coat up in the air. Lord knows I was so geeked when I got to his house that I almost fell sprinting up the stone staircase. This has become a tradition of sorts that I look forward to during Max’s Winter break. I take the day off from work so we can go gallivanting throughout the metro Atlanta area in search of hi-jinks and good burgers, we swap Holiday gifts, discuss his vacation, etc…. For me though, it’s greater than that. Its decompression, its validation that I haven’t wasted my life watching t.v. or movies and basically…..well…he’s just a giant “re-set” button.

I hemmed and hawed over getting him Season One of “The League” (one of our fav shows) but in the end, made a much more sage decision.

It came out while he was on vacation last week so I knew there was no way he’d seen “It’s a Trap” yet.   He was totally feelin’ it until he suddenly remembered he’d left his present for me back in the house and ran to grab it double time quick. We WERE starving after all.

I cheated and took this pic at home.

My husband said “That’s lame. You should at least be in the picture”. Really? He took like 5 pictures and I looked the LEAST like a mental patient in this one. You hear me? The least. Egads.

I was so touched though. Max didn’t forget that Jason X is one of my favorite Friday the 13th’s or that I didn’t have it. We both love slasher flicks so debates about Jason Vorhees, Freddy Krueger and Michael Myers can dominate the conversation for hours. I’m proud to say that he was introduced to Evil Dead II  by yours truly and for any horror junkie, that’s like the Holy Grail you’re sharing with someone right there. Although he found it somewhat dated, he still loved the humor and direction which was close enough for my nerdy delights.

We punched Farm Burger’s coordinates into my ghetto GPS and set out for W. Ponce De Leon Ave.  I call it my “ghetto” GPS because it was cheap AND also because if there is a ghetto anywhere close to the desired location, you will be guided right through the heart of it. Oh make no mistake, you’ll arrive to your destination, possibly missing your rims or with a bullet wound but the end result is all it cares about.  No “avoid ghetto’s” feature has been a crack dealer in my side ever since I got the damn thing.

Downtown Decatur on the other hand  is a beautiful place that should never be avoided (bad segue) and Farm Burger is snuggled almost secretly on it’s cozy streets. We nearly passed it, thought it was a gas station and I suppose at one time it was. Not a huge place by any means but according to all the buzz,  it was a must to add to our quest. I’ll let Farm Burger explain it best…

“Farm Burger wants you to think about your burger – what it is and where it’s from. Our burgers are made from 100% grassfed beef that is dry-aged for two weeks and ground fresh. Our cows are raised on the sweet grasses of the southeast, and never fed antibiotics, hormones, or grain. Our menu is seasonal and sourced from local farms. Our space is convivial and comfortable – because eating is a celebration to be shared. Our food makes ethical eating easy.”

Going by the line and how crowded it was inside, we were pretty sure those weren’t just words.

Max is still gun shy from all the hype around Killer Grindhouse Burgers and refuses to believe that we won’t be walking into a Vietnamese fish market until he sees it with his own eyes.  Speaking of, we overheard a couple of other young beef worshippers laying praise to the aforementioned by the bucket load. Max just shook his head. We’ve agreed that many of Grindhouse’s followers just like it because they think that it’s hip as it has to be sought out and isn’t so easily accessible.  Also the same people who will put up with Ms. Ann’s crap at her Snack Shack in order to get that “Ghetto Burger”. It looks freakin’ fantastic, I just don’t think it’s worth being treated like garbage and waiting two hours in a rat hole (silently) to get it.

The atmosphere at Farm Burger is just the opposite. While the line is long, it moves by relatively quickly and the service is exceptional. The demographic is diversity all the way, serving every walk and station of life. Families, couples, students, the elderly, you name it. Everyone has a place at F.B.

We passed on the Pork Slap (Max is Kosher)

But weighed the rest of our options with much more shrewdness.

By the time it was our turn at bat, we were ravenous wolverines rattling off our orders tinged with serious necessity.  A number was given to us as a guide for the food to our table but as we turned to face the masses, there wasn’t a seat to be had. We stood awkwardly in the middle of the restaurant for a moment, considered asking a random family if they’d get Amish and let us commune but were swiftly rescued by an employee who found us a high top before we embarrassed ourselves.  Bearing in mind the amount of customers Farm Burger is serving, they handle it incredibly well and it’s obvious why so many have recommended it to me.  Not only is the service impeccable for how busy it is, the food itself is crazy good and we were floored that it came out so fast.

Ohhhh Mama….I had to beg him to let me get a better shot before he got medieval on it. 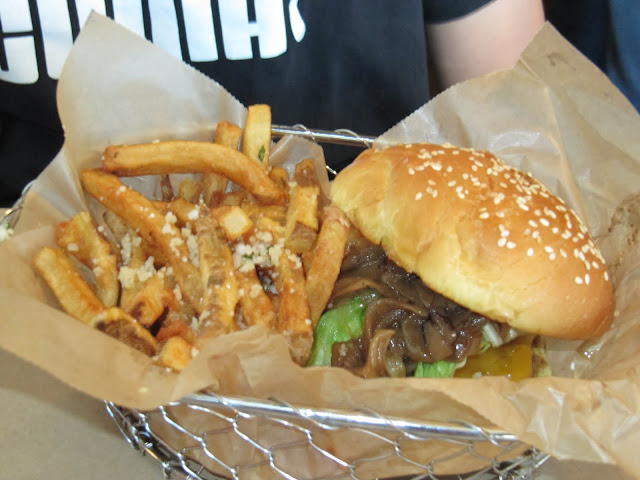 Max went for the carmelized onions, lettuce and cheddar cheese accompanied by the standard yet classic mustard/ketchup scenario.  While Farm Burger offers a variety of snacks like fried chick peas,  fried chicken livers and pickled eggs they also provide a butt load of choices when it comes to your sides.  You can do sweet potato fries, regular fries, fried okra, beer battered onion rings but Max and I both went with the FB fries. Coated in spicy herbs, garlic and parmesan, you will want to have some alone time with them or at the very least ask others to look away as you debase yourself in a hog like frenzy. 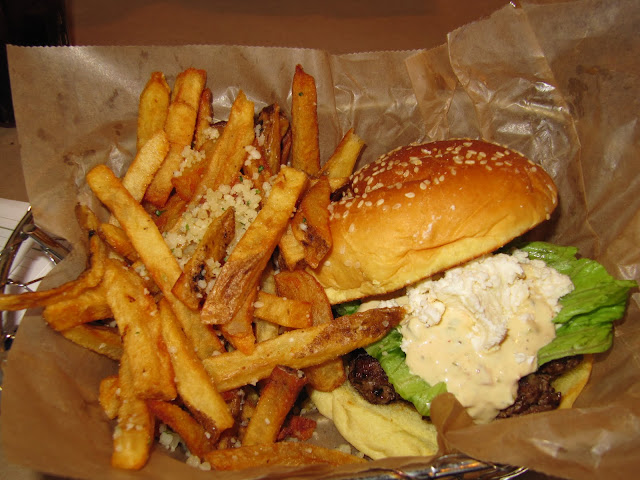 We were both in agreement that the buns were killer. Soft on the outside, crispy on the inside. I messed up though, got mine well done when I should have went medium so it was slightly dry. Max ordered correctly and claimed it to be neck and neck with Holeman and Finch as far as being super juicy and mouth meltingly wondrous. We agreed on a star system today going from one to five and proclaimed Flip Burger still to be the only establishment to retain a five star ranking.  And THAT’S with sucky service. George’s got 3 1/2 while  Grindhouse and Canyon got 3. Farm Burger gets  4 ½ (so Starsearchy) just like H & F but it was decreed that the former gets top billing when it comes to those amazing parmesan fries. Sweet Jesus, I just want to be submerged in a tank full of them with the implicit instruction to eat my way to freedom.

There’s not much more that can be said (you gotta go), just rest assured if you’re also on the hunt for the best burger in Atlanta, Farm Burger is not just hype, it’s the real deal and worth checking out. You will CLEAN your plate and be filled with greasy grins for hours guaranteed.

Been hearing lots of good stuff about the brick burger at the Brick Store Pub in Decatur. Thinkin’ we’ll pop it into the old GPS and with a little luck we might make it there gun shot free. If not, no worries, we’ll just plug the holes with beef and keep eating.