It’s been awhile since Fox has introduced a new animated series into its Sunday “domination” lineup that has really put me on notice. Although I’m a mental idiot when it comes to “Family Guy” and “American Dad”, the perpetual pumping up of the “Cleveland Show” barely forced me to keep my behind on the couch the night it debuted. Don’t get me wrong, I loved Cleveland on F.G. but never felt as though he was a strong enough character to carry the weight of an entire series on his chubby shoulders. If anything, it seemed like the character of Glenn Quagmire would have been much more suited for that task. Truthfully, as much as I’ve attempted to get into it, it’s just not my bag and it definitely doesn’t fill the “King of the Hill” sized void that was left for me once that show was canceled.  After 13 seasons, K.O.T.H. had definitely run its course but like The Simpsons, it at least still had a unique signature that wasn’t oozing with Seth Mcfarlane. No back lashing here, he’s amazingly brilliant and I’d kill for an ounce of his mojo but 3 shows by the same creator in one night….it’s far too much of the same view point especially when Family Guy and American Dad are just the right amount of different from each other.

Enter-Loren Bouchard, the mastermind behind two of the absolute funniest and imaginative cartoons (Dr. Katz, Professional Therapist, Home Movies) EVER. Bouchard is a guy who should bring hope to high school dropouts everywhere that talent (in some cases) supersedes a diploma. Clearly one of the main reasons why both of those shows were so hilarious (besides the writing) was the ingenious voice talent/acting of H. Jon Benjamin and it would seem that bringing him on for the lead character in Bouchard’s new series was a gimme. As the lazy but lovable Ben Katz (Dr. Katz’s son), Benjamin provided pointless phone calls and silly interruptions between his father’s therapy sessions with a multitude of the most recognized comedians of that time.

I still say their relationship is one of the most wonderfully written on screen father/son deals that’s been done, animated or otherwise.

As the bumbling Coach McGuirk on Home Movies, he provided some of the worst advice and soccer coaching skills that 8 year old budding filmmaker Brendon Small could possibly receive. And most currently on FX’s “Archer”, Benjamin has been all sassed up in a handsome new package but still retains the glorious dufusness that has become his trademark. 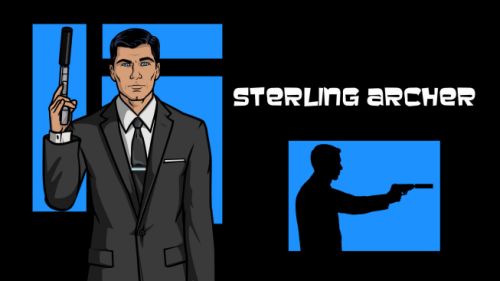 No lies, I’m not a huge fan when it comes to that show (try as I might) but he’s not to blame. It’s more the writing and ensemble cast (sorry Aisha Tyler)  that put me to sleep. Just one nerd’s opinion obviously since it seems to be quite successful, garnering a decently sized following.

That’s also why there was so MUCH anticipation on my end when it came to “Bob’s Burgers” because A.- with Bouchard at the helm it was assured the writing would be top notch and B.-with a cast that included his go-to Benjamin along with the completely out there comedic stylings of Kristen Schaal (Flight of the Conchords/The Daily Show) and Eugene Mirman (Delocated), it didn’t seem like it could miss. Then again, we all know what can happen when something is over-hyped or too many stars are aligned. Would Bob’s Burgers fall short of a cartoon geek’s expectations? By the ghost of Tex Avery, hell no! 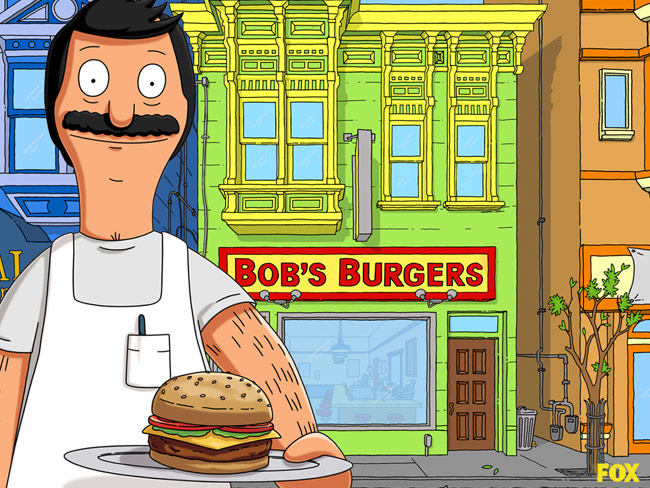 In the premier episode we find him attempting to guide his extremely unhelpful family through yet another re-opening of their downtrodden burger business. It’s Labor Day weekend and what could prove to be an auspicious new beginning is riddled with adversity. Bob forgets that it’s also his wedding anniversary to Linda (John Roberts), his son Gene (Eugene Mirman) torments the customers next door at the crematorium while passing out samples and making fart noises via megaphone into their faces. His daughter Tina (Dan Mintz) has been stricken with a random itch in her private parts that leaves her the use of only one hand and therefore impedes any assistance she can provide on the grill. But all of that is trumped when the rumor his daughter Louise (Kristen Schaal) started at show and tell catches fire, bringing the health inspector to make sure Bob isn’t using human flesh in his patties.

Within the first five minutes rest assured you will fall love with all of the characters. Bob’s wife Linda is perpetually supportive in her own brutally honest way and despite Bob’s wet mouthed kisses and business failures, she doesn’t seem willing to ever give up on the dream he’s sold her on. Tina is completely bizarre and perfectly described as socially retarded while Gene may very well be the most annoying son a parent could be cursed with. But the standout is Louise, the smartest yet most diabolical of the three Belcher children. Even after being threatened with punishment, she still changes Bob’s chalkboard advertisement of his debut burger “New Bacon-nings” to “The Child Molester-( now with free candy)”. And then there’s Bob himself. Just a likable Joe Shmo trying to turn his big meaty vision into a reality despite all of the crap that continues to be hurled in his direction.

Nothing taken from Mintz or Roberts as they fulfill their purpose but Kristen Schaal and Eugene Mirman will hopefully become household names if this show takes off. I was lucky enough to catch Schaal’s stand up before the Flight of the Conchords at the Fox last year and it left me crying, even more so than Brett or Jemaine. And Mirman who was great on that show as well totally kills you with laughter as he unsuccessfully attempts to murder Jon Glaser’s character on Delocated week after week. It’s fantastic that they’re being given a chance to bring their unique senses of timing and humor to a much wider audience.

While it’s not quite grade A beef just yet, the pilot episode is already as good as some shows that are now running a season two or three and there were definitely enough big laughs to keep a toon junkie coming back to see what happens in the next episode. Another reason besides those already mentioned, would be the promised, eventual reunion of the entire cast of Home Movies (the first had Andy Kindler) at some point throughout this first season.  That includes Brendon Small and for any “Metalocalypse” fans out there, stay tuned for that! If all of the points made here still aren’t enough to force you to just give it a chance, then I’ve failed miserably and  completely deserve “The Thinker” if it comes around on the penalty wheel. If you ARE convinced and wanna check it out though-FOX Sundays at 8:30 P.M. The first episode is also being aired in it’s entirety on Hulu.