When you’re a television addict, it’s a rare occurrence that any show or format can really surprise you.  Sure there are BETTER versions of sitcoms, cop shows, medical dramas, legal crap and so on but a unique premise, one that hasn’t been explored before is like finding out the coolest kid in school is a red head. No offense to Gingers or anything, but you have to admit it’s infrequent. That’s also why when you hit on something exceptional (even in its infancy) you’ll be drawn in like mad and half the fun (to this fool anyways) is witnessing it become a toddler then watching it go off to Pre-K.  That’s what a great show is like for me, a baby that I’ve adopted whom I nuture, protect and encourage.  I tell it “You keep going ,you. You’re mama’s special, little angel ”. O.k., fully aware of how strange and sad that is but that’s exactly how I feel about The Benson Interruption.  I “stumbled” upon it gratefully as C.C. didn’t exactly do a P.R. blitz or give it a good time slot. What I found was the finest and most irreverent form of stand up I’ve seen in a minute. Doug sits on his throne (mic in hand) while 3 different comedians appear on stage in succession attempting to do their act. 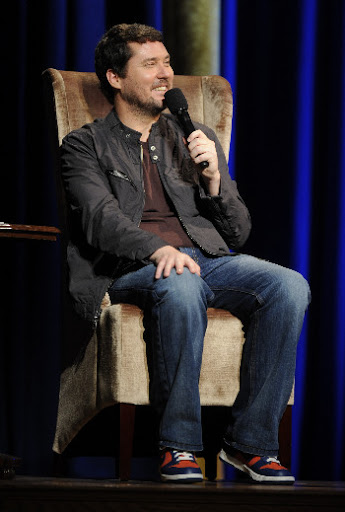 I say “attempt” as Doug’s primary goal is to interrupt them as they try their bits out on the audience. Basically it’s a comic heckling a fellow comic but what comes out of it is so much more than that. Benson (thus far) has stuck with using buddies of his and the usual end result is him making their act even funnier by adding his own wry observations or personal thoughts on the material which ARE hilarious. In the pilot episode, the interaction between he and Nick Swardson caused a convulsive laughing attack that left me reaching for an imaginary asthma inhaler. 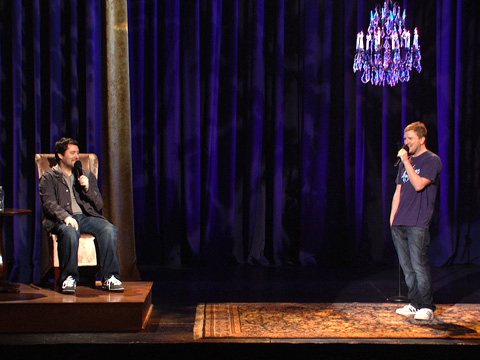 If you don’t know Doug Benson, he’s one of the best stand up’s in the biz. I’ve been a mega-fan since his parody documentary Super High Me as well as his appearance on the fifth season Of The Last Comic Standing.  How he was voted off ahead of some of those hacks is as much a freaking mystery as what actually happens to the contestant who wins the damn thing.  Ummm… NBC….STILL waiting for Dat Phan’s sitcom based on his Asian family’s nail salon to begin. Well not really, it seemed kind of dumb and humorless, it’s the principle.

I didn’t even realize till after a bit of research that Doug played some small roles on one of the best H.B.O. offerings (Mr. Show) of all time. Nor did I recall that he was in the DVD release of Run Ronnie Run. He’s like one of those comics that have been busting it out forever but only just now, in these past few years, is really finding a huge audience. His last three live stand-up albums have killed (especially Unbalanced Load) and his weekly podcast (Doug Loves Movies) is ear/brain candy for any cinephile. The Leonard Maltin game can be wicked intense and superbly amusing when played by the A-list funny people and actors that Benson garners. Zach Galifinakis, Patton Oswalt, John Lithgow, Michael Cera, Bob Odenkirk…. just to name a few.  His “tweets” may be the only reason that I would consider joining Twitter.  I click on his link daily but rebel against full submission to the cunning, time stealing temptress that she be.  Next thing you know I’ll be wondering what Kim Kardashian thought of The Black Swan which will be followed closely by my untimely suicide provoked by the “lame shame” of it all. It’s just something that’s best left alone when you don’t have much self control.

Comedy Central gave Doug Benson 6 episodes (the sixth airing last week) to see if what made his live show quite popular, translated effectively to TV audiences.  I hope beyond hope that it was enough to show them that it works. The format takes a minute to get used to as each segment’s success is ultimately based on how well he and the “victim comic” riff off of each other, also a major part of the appeal. You may think someone like Thomas Lennon who has a huge background in improv (Reno 911, Viva Variety,) would waltz right through it. Not so, he definitely struggled while Greg Proops (Whose Line is it Anyway), another improv genius, slayed!  Todd Barry, The Sklar Brothers, Brian Posehn and Eugene Mirman were also K.O.’s. Adam Carolla -not so hot.  To a major comedy nerd, it’s like watching your favorite actor do Shakespeare. It PROVES who really commands their craft in such a fantastic way.  If you can somehow do battle with Doug (without abandoning your act) and keep up with the knuckle balls he’s pitchin’, you are truly a master at stand-up comedy. Doug may look completely stoned AND probably is, but his intellect and satire are not ex-haled preshow. He’s as sharp as he has to be. During the “tweet off’s” portion between Benson and his guest, both read actual tweets they’ve written aloud from their phones with Doug almost always leaving a smoldering wake of astute cyberness.

No decision yet if it will be green lighted for more episodes but if they’re looking for suggestions on how to zazz it up even more…..

No matter what they do, I just hope that Benson will be given the opportunity to see his baby take its first steps in a full season with more network support. If it was this good without much backing, it can obviously only get better.