If southern gothic had a sound, it would be Dex Romweber Duo. The bare bones of guitar played by Mr. Romweber himself and drums finessed by Dex’s sister Sara are all that are needed for these two to create a sound that will take you back to the roots of when music was played in honky tonks and garages. The brother and sister have a long history in music. Dex, most notably with Flat Duo Jets and Sara with Let’s Active and Snatches of Pink.  Dex Romweber Duo in currently touring, playing some of their classics and songs off their latest album “Is That You In The Blue?”  My favorite over heard line the night of July 24th when I saw the two at the Star Bar was, “They are what Jack White wishes he was.” 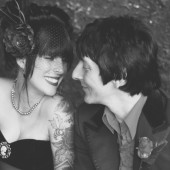 Train and The Fray – Aarons Amphitheatre