When Suzie Jones shows up at that local venue or bar (I have dubbed Suzie as the band mascot), you know there is about to be a party, because she is one of the many loyal followers of the band Tragic Souls that consistently and faithfully shows at every one of their gigs. The group was unofficially formed November of last year, becoming official when Gil “The Zenmeister” Carter (bass) was added 7 months ago. The group also consists of Dave “The Golden God of Drum Thunder” Jackson, Thomas A.” Mr. Fancy Pants” Poore on lead vocals, Phillip ” The Pied Piper” Coffey on Lead Guitar, and Wes” The Worshiper” Davis on lead guitar/ rhythm and backup vocals. Wes does belt out a couple tunes to give Thomas a break and Gil fills in on drums so Dave can come down from his throne and throw down on the mic. When you see these guys perform you will understand the nicknames I gave them, except Thomas, whom I believe got his nickname just as much from offstage as on.

The members of Tragic Souls are very close. Wes, Thomas, and Phil have been friends for over 20 years. Gil and Wes have also known each other for over two decades. There are no egos on this stage. That,” I am too mysterious and special to do anymore than nod at you” disease that often plagues musicians is not present here. As Phillip Coffey says himself, one of the things that sets this group apart is the sense of brotherhood. There is no distance between the fans and the musicians besides the feet you are standing from the stage, and if you get too close, you may just wind up on it. Don’t think hiding over there in your little dark cubbyhole will protect you either! Phil and Thomas have no problems playing hooky from the stage to hunt you down in the crowd and throw the spotlight on you.

Wes’ take on what sets the band apart is this: “Energy and commitment to being tight and accurate. Also, I believe inside we are all young at heart and able to channel our inner kid, that was able to turn a tennis racket and a living room into Madison Square Garden…we still treat every show like it’s Madison Square Garden.” Dave’s words say almost the same thing. “As a youngster I read an interview with Gene Simmons and he said that when KISS first started out playing small clubs…it didn’t matter what the size of the crowd or venue was….they treated every show as if they were headlining Madison Square Garden. That has always stuck with me and every time I step onstage…there’s always a bit of Gene’s attitude and showmanship in my performance !!!…we still treat every show like it’s Madison Square Garden.” My take on this is to quote one of my favorite sages and philosophers, Heraclitus: “Man is most nearly himself when he achieves the seriousness of a child at play,” and that is exactly what these guys do! With every childlike, precocious and dedicated artists bone in their well lived in and thriving bodies. Gil was right in sync when he said, “Our skill and energy. We are all very skilled players. We should be with our age. But, what is the best, is our performance. We really enjoy it, and it comes out. Ours is not just a show you come to see. It’s a party you are a part of. If you do not have fun at a Tragic Souls show, you need to see a Doctor!” Thomas is probably the biggest ham in the group, so that he agrees with this goes without saying. Thomas also added that Dave is their center, he keeps their grounded, and despite how he appears on stage, he is the probably the most sober and serious of the group. He is the heartbeat of the band! Dave and Thomas both agree they would lost without Charlotte, Dave’s wife, who brings to mind a modern day Lita Ford. She handles much of the guys’ negotiations and almost all of the fliers and promoting materials, as well as being quite handy with the graphics! Rhonda, Thomas’s wife as he made emphatically clear, “Keeps me organized and straight, and brings a smile that is contagious”. 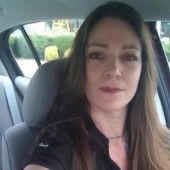 I am farm girl born and raised with the love of woods and wilderness in my blood. I have been writing my entire life, every form of writing: theoretical, stories, poetry, prose, newspaper reporter, open mic readings, freelance columnist and editorial contributor. I am also a seasoned photographer whom learned old school on film 14 years ago. My photography skills are limited to nothing. I am a lover of all arts, and in my mind photography is a fine art, and my dedication to it as an artist, is limitless.